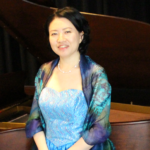 Reiko Shimokawa has received numerous awards, including 2nd place at the 8th Pacific Piano competition in Canada in 2002 and the Musical Activity Award from the Yamaha Music Foundation of Japan in 2001.
In 1993, she went to England to study piano and completed her Bachelor of Music (B.Mus.) degree from the Royal College of Music and received postgraduate certificates from Trinity College of Music in piano and Guildhall School of Music and Drama in piano accompaniment. In 1999, she went to Canada to continue her studies and completed her Master of Music (M.Mus.) degree from the University of Victoria and also received a Diploma in Music Performance from UBC. Her world-renowned piano teachers include Dr. Sara Davis Buechner, Lee Kum-Sing, Ronan Magill, Noriko Ogura, Paul Roberts, Masahiro Saito and Bruce Vogt.

Also, she has taken organ lessons from Miho Nakazawa and Ryoki Yamaguchi.

In 2016, she collaborated with the Italian Accordion player, Giuseppe Scigliano. In the June 2016 issue of Magazine Chopin, a critic commented that she is “The pianist who conveys the passion of Tango” .

Her 2 CDs have been released from Victor in Japan with her maiden name Reiko Nakatsukasa, entitled “In Earth’s Many-Colored Dream” and “Tunes of Clowns”.

Her latest CD is “Reiko Shimokawa~A Collaboration between A Period Instrument String Quintet & Modern Piano”.  The CD includes Beethoven Piano Concerto No.5 “Emperor” Piano and String Quintet version arranged by Satoshi Minami. Recently, she has expanded her range of activities into Early instruments. From 2019, she has organized an Early Music Seminar by Kosaku Iwata. In the “Bach in the Subways 2020”, she performed Reed Organ at Yatsugatake Reed Organ & Harmonium Museum, Pipe Organ and harpsichord at Shizuoka Bach House. She frequently appears as a pianist in the Young Virtuoso Series produced by Support Music Society (SMS).
She is a member of the Koto Ward Musicians Association, the Leschetizky Society of Japan and the Japan Harpsichord Society.